Increase Your co2 Laser Power for Under $25

There was a mishap this past weekend that, at first, had me a bit upset. As it turns out, however, it was one of the best things that could happen. As a result, I was able to increase the useful power of my co2 laser by at least 20%. And I did it for about $25. Want to know how you can too? Read on. 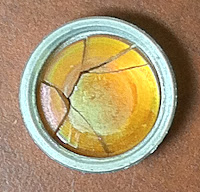 First, the mishap I had to deal with. Seems like about once a year (always in April or May as it turns out), I crack, or in this case shatter, the co2 laser lens. More than anything, it is an annoyance. I usually have a spare for situations like this; but this time was different. I had failed to replace the spare the last time this happened. Darn it - out of business till I can get another. That was the annoying part.


So I emailed the good folks (Marco) at LightObject.com. I have always purchased my optics (as well as my DSPs) from LO, and they are fantastic at getting product out fast. And for most of its product line, their pricing is pretty competitive. For the 20mm ZnSe focus  lens I normally buy, the price is about $40 - pretty reasonable. Like I said, the fact that I did not have a spare and having to get one quickly was more an annoyance than a financial hardship.

I told Marco what was going on and he suggested I try out one of his higher-quality lenses. They run a bit more (under $50 for the "Improved" lens and under $65 for the "High Quality" lens). Let's see... I am already going to spend $40 minimum. Upgrading would only cost me an additional $10 or $25. Now, I love a real bargain, but I have also learned that it is hard to be dissatisfied owning the best. Whenever I can afford a reasonable upgrade, I try to go for it, and $10 or $25 is affordable, but is the upgrade really worth it? I decided to find out. So, the $25 upgrade is what I went for.

It arrived yesterday, and I could hardly wait to install it. As soon as I got to the shop, last night, I carefully unwrapped the new lens and took at look. Right off the bat, I was pretty sure I could see a difference in the clarity. So I placed it next to my old (broken) lens on a piece of paper that had some very small printing on it. 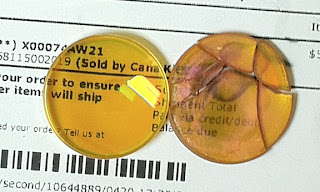 WOW! The difference was unbelievable.

Admittedly, the old lens is, well...old. And it was certainly a bit dirty. But taking that all in to account, the difference is still pretty amazing.

At this point, I was really hyped about putting it in the laser and seeing how it would perform.

I carefully installed it and ran some initial tests. One thing I had to do was recheck my focus height. The old lens was a 55mm lens. This one is a 50.8. I ran a ramp test and found the sweet spot, which, by the way, was far more obvious than it ever was with any of my previous lenses. Recognizing the sweet spot was trivial. I measured the distance from the top of my laser head carriage plate to the sweet spot point on the rap - 66 mm. Yep, that is definitely shorter than my old one. I'll have to make a new focus gauge.

I drew it up quickly in Corel and sent it to LaserCAD for downloading to the laser. As a matter of practice, I normally cut 1/8" (3mm) craft plywood at about 6 mm/s with 65% power (= 15mA). And it cuts pretty well. But lately I have been trying to use the new PPI settings in LaserCAD for the AWC608 controller. The thing I had been noticing is that when using PPI (200) for cutting plywood, it certainly meant I had to cut the speed to make up for the loss of power associated with PPI operations. In fact, I believe I had been slowing it down to about 4 mm/s. The PPI would reduce the charring enough to be noticed, but not enough to produce a real WOW. And the cutting was not always that clean. Still, I like the modest gains it was giving me.

The question was, what power and speed and PPI/no PPI combination do I try. With the additional clarity of the new lens, I decided to just set it at my original 6 mm/s, 65% (15mA), and add in the 200 PPI and see what happens. Want to know what happens?

It produced the best cut quality (narrower beam/kerf)
I have ever produced on this laser.
And, the charring was, by far, the least I have ever had.


Check out the photo. I think you will agree that the cut is nice and the charring is minimal.

Of course, I need to do some more extensive testing to know just how much improvement in power I got, but the initial impression is that the increase is worth way more than the $25 extra it cost me.

Obviously, if your lens isn't broken and aren't planning on buying a new one right away, then upgrading is going to cost you a little bit more. And if you already have a better lens than I was originally using, then going to this high quality lens may not give you as much improvement as I had. But, when the time comes, (or now if you just want more power and quality) I suggest you consider going the extra for what I believe will give you a nice little power boost.
Posted by Tim Wehr at 07:27