Laser Power Settings Via PWM Can Fool You

When I bought my first cheap Chinese laser, I set the laser power level with a variable resistor and a mA meter. It worked, but it seemed just a little too iffy to me. If I moved my angle of view of the meter, I would see different readings. I couldn't help longing for a way to be more exact, more repeatable from job to job. Then I heard about the magical PWM. I didn't know what it was, exactly, or how it worked, but I was hearing that it was the modern digital approach to managing power levels in your laser. I'm a modern kind of guy. I'm a digital kind of guy. Sounds like just what I was looking for - or was it?

Let's back up for a minute and try to understand the difference between the old analog controlled laser power supply and the newer digital PWM capable system.

In the PWM world, the controlling input signal is either 0v OR 5v, but never anything in between. It is digital, having only two states - on or off. How in the world does the power supply know what power level is intended? Turns out it is also pretty easy to understand. PWM is an acronym for Pulse Width Modulation. In a PWM system, the power supply expects to see a series of pulses (P) of varying width (W) to which it responds by modulating (M) the output - thus PWM. 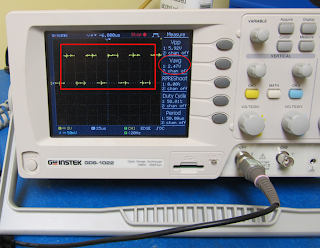 Look at the picture of the screen of my oscilloscope. (Click the image to see a larger view.) It shows a more or less square wave form that runs from 0 to 5 volts (2 volts per division).

Also notice to the right of the waveform display that it states the average voltage is 2.47 volts. That's pretty darn close to 50% of the 5 volts (any my 5v may not be exactly 5v anyway).The PWM is not reading the strength of the signal, but rather it reads the % of time the signal is presents (5v). So PWM is really just averaging the time that the signal is 0v and the time it is 5v. Like I said, not so hard to understand.

And that sounds like the answer I was looking for. After all, my controller was capable of sending the necessary PWM signal to the power supply, so all I would have to do is install a new laser power supply - one that could accept the PWM signal and I would then be able to know that 50% output would mean 50% of my 40 watt capability; 30% would mean 30% of those 40 watts, etc. Well, that is what I thought.

I ordered the power supply. I installed the power supply. I removed the mA meter (after all, I now had something a lot more exact, more predictable, a lot more repeatable, and a lot more "cool" - I had PWM! I was modern. I was digital! And when I want lots of power to cut material easily and quickly, I can set at 90% and run. Why 90%? Because I had always heard that 100% would shorten the life of the laser tube. And this is how I worked for about a year.

More recently, however, there were some things that made me stop and think more about how this all works. I started getting inconsistent results in both cutting and engraving. I also started learning a lot more about the relationship between laser power supplies, laser tubes, and laser power.

It would be reasonable to believe that a laser power supply designed for a 40 watt laser tube would be safe to use throughout the entire range of its output. Unfortunately, that is not the case. So, the first and I believe the most important thing I learned was this:


Laser power supplies are capable of outputting a great deal more power than laser tubes are able to safely consume.

Laser tubes are rated for three things:
For example, my 40watt laser tube is rated for a trigger voltage of 22,000 volts, operating voltage of 15,000 volts, and a maximum current of 18 mA. When I reconnected the mA meter on my laser, I discovered that my power supply, at 90% PWM signal was actually outputting nearly 25 mA. Ouch! No wonder the tube's output was inconsistent. I was, at times, feeding it nearly 150% of what it was capable of using.

As a consumer, I would love to have seen the power supply have a built-in maximum current limiting feature, either automatic or manually adjustable. That way, I could set up my lasing jobs at something between 0% and 100%. There are some models, I believe, that do have an adjustable max output, but that is not the case with mine. I have had to set my controller software to disallow anything over 60%. By the way, tubes never trigger at 0% or 1% etc. Mine triggers at about 12.5%. So I have to think in terms of a total range of output between 12.5% and 60%. Not nearly as mentally convenient as 0 - 100.

I suppose it is a matter of economics. The manufacturer wants to save money and be competitive. A 50 watt tube, by the way, needs the same 22,000 volts trigger, 16,000 volts for operation, and maximum current of 20 mA. Since my power supply already has the necessary 22,000 volts trigger voltage and is capable of well in excess of 20 mA, I am betting it actually has an operating voltage of 16,000 volts, which means it would do just as well powering a 50 watt tube as it does a 40 watt tube. Again, this is an advantage for the manufacturer and the retailer - one unit that will cover both, especially since 50 watt tubes are not as widely used as the 40 watt versions.

The second thing I learned from all of this is:


Laser output power is based on the voltage and current running through it, not the signal level that is driving the power supply.

Yeah, I know - should be obvious. But that's where the whole PWM power % thing fools you. So we need to find a different way to measure it. Since circuitry for measuring thousands of volts is expensive, and the voltage output of the power supply should be pretty stable, it is reasonable to simply measure the actual current flowing through the tube and use that as an indicator of the tube's output. That's why lasers typically come with a mA meter.

I learned to live in the 12.5% to 60% world pretty well. I keep records of the best results from all my different material types and I get along pretty well that way. Still, it would be nice to have some kind of table to show me the real numbers driving all of this. 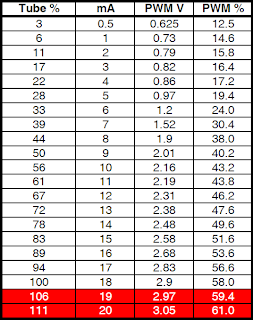 This weekend, I set out to construct that table. Here is the result. To gather the information, I manually set the current at 1 mA and using my oscilloscope measured the input signal voltage (between 0v and 5v) that was producing that 1 mA current. I repeated this process for each mA increment up to 20 mA and put it all in the table.


NOTE: This is what happens on MY system, and it is very likely NOT what you will find on YOURS. You should run a similar set of tests. The oscilloscope is not a requirement. You can do well enough with a simple VOM (volt ohm meter).

I have also discovered that my self-imposed limit of 60% is still a little strong. 58% would be more appropriate and I will be using that in the future.

With this table, I can start thinking in terms of % of tube capability instead of % of input signal. For example, if I want 50% tube power, I can quickly see that is 9 mA and that it takes 2.01 volts of signal which I can get by setting my PWM % to 40.2%. In practice, of course, I would not be looking at all the columns, only the 1st (left) and 4th (right).

Just as another confirmation that the PWM % is, by itself, not that valuable, here is a chart that shows how the PWM% measures up to the tube's % (mA). 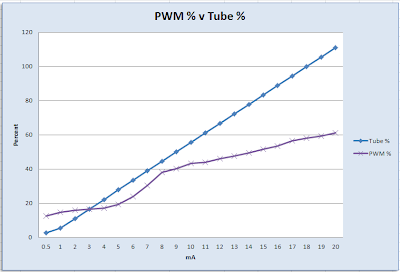 Even though the PWM% is somewhat linear overall, there is a definite change in slope from about 2 mA to 8 mA.

Don't get me wrong. The PWM IS useful. It is a great way to automatically get reliable and repeatable results. Since my controller is capable of either PWM or analog output, I could be using either one and still get that same consistency.

Armed with the knowledge that I have gained over the past couple of years, I am confident that I can work better and more reliably with the settings table I developed. There is one question that kind of nags at me though. Do the readings of current running from a given power supply through a particular tube correspond to the readings I would get with a different tube and the same power supply and settings? I hope to get an answer to that in the next week or so. Today, I ordered a new tube. I suspect my current tube is not at full strength or reliability due to the several months I was over driving it. When the new tube comes and I get time to install and align it, I will rerun my tests and report the results here.

One final thought to leave you with. I have been rather loosely referring to the current (mA) as the tube's power. That is, of course, not accurate. The tube's power is not measured in mA and % of power is certainly not % of max rated current. The only way to acurately measure the tube's output is with a power meter. Unfortunately, those cost several hundred dollars and for my purposes, the expense is not warranted. It is possible to rent one though. Maybe...........