One important part of keeping your laser working at its best is keeping the tube temperature consistent. There are dozens of methods in use around the world, everything from minimal cost low tech home brew solutions to high priced commercial chillers. With a few days off of work (finally!) and another major project on temporary hold, I had time to tackle the problem and see what I could come up with. What I came up with is semi home brew but at a very affordable price.


For quite a few months, now, I have been wanting to have a better laser tube cooling system on my BuildLog.net Laser 2x. Like most co2 lasers, the laser tube is kept cool with a continuous stream of water. But that only works well if you can find a way to keep the water at a consistent temperature.

If you have $400+ and a higher power laser (100+ watts), you'll find a few chillers out there that will do the job pretty well. But my 40 watt system doesn't require that much, and I didn't want to spend that much anyway.

The cheapest way - the way recommended by most of the sellers of lower power Chinese lasers - is to use a gallon bucket of water and put some ice cubes or an ice pack in it. Actually, that works pretty well, at least until the ice/pack melt or thaw. Then the temps start going up fairly fast. On longer jobs, it becomes a real chore to try to keep the temps consistent by replenishing the ice/pack at the right time.

A lot of laser owners just increase the size of the reservoir to about 5 gallons and forget about the ice. This actually works pretty well, too. In fact, I did it that way for a while with the previous laser. On this one, however, I had been searching for something less bulky and, hopefully, using at least a little bit of technology. (Face it, I like tech!)

Another option that is becoming pretty popular is to use various forms of computer CPU chillers. This seemed like the most logical idea to me.

Recently I spotted a pre-built CPU cooler radiator/fan setup that was reasonable in price, already had the tubing nipples (often an expensive add-on), and even had a wired fan speed control. Best of all, the price was only about $25. I found it on eBay - ThermalTake Cooler.

Not being sure that one would be sufficient, I went ahead and ordered two, figuring $50 was a reasonable price for this project, and would be, by far, the biggest part of my cooler budget. 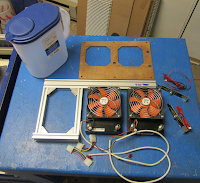 For the reservoir, I found a 1 gallon closed top water pitcher at Wal-Mart for under $5.00.

I used my laser to cut out a mounting plate for the two radiators/fans and controls.

To hold it all together, I built a quick frame from Misumi 20/20 and 20/40 extruded aluminum I had left over from another project.

Since the fans are meant to be powered by a computer, they require a 12v DC power supply. I removed one from an old computer, hacked away most of the power leads, added a terminal strip for 12v, 5v, and 3.3v and ground outputs (just in case I need a quick source of power at those other levels for testing another project in the future), and finally I added a mini switch to turn the whole thing on and off. A few feet of 1/4" tubing topped it all off and I got away for about $70 out of pocket.

Here is a video of the initial testing. 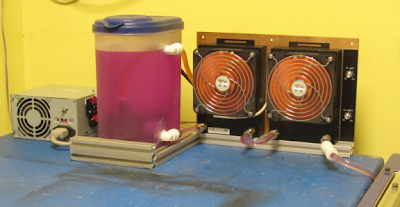 I tested the system for several hours to ensure it was not going to spring any leaks.

I then installed it near the laser, plumbed it up using the new tubing, and finally, I added RV anti-freeze as my coolant medium. It will likely help keep down any organic growth and protect it in the winter if I ever have an unexpected loss of power (heat) in the shop.

Results have been pretty positive. To monitor the system, I installed a temperature probe right at the outlet of the laser tube. That gives me a good idea of what actual tube temperature is. With most engraving jobs, regardless of the time the job runs (longest test so far was 45 minutes), the water temp stayed at 1-2 degrees c above ambient room temperature. That seems pretty good to me. My shop is both heated in winter and air conditioned in summer, so staying within a couple of degrees of what is comfortable for me seems to be comfortable for the laser as well.

The only time I saw anything outside of that range was when I did a 10 minute high power cut. It went up to about 5 degrees c above room temp. I think, if I were to increase the size of the reservoir to 1-1/2 or 2 gallons, I could get that back down to where I like it.

Overall, I feel pretty good about the results of this project. Hopefully, you will find it useful if you are also searching for a good and affordable way to keep your laser tube temperature consistent.